Whether you plot your stories out in detail, or prefer to let the story unfold as you write, it’s a good idea to leave room for serendipity to play a part.

These happy, unexpected discoveries are the ideas or story twists coming seemingly from nowhere – the dog you didn’t know your character owned; the plot twist you didn’t see coming; in short, anything you didn’t know was going to be in your story until it popped up.

I’ve been making these discoveries for years and know enough now to let them come. Even if I don’t know why a character acquires a dog, I leave it in. As Kate Grenville says, “It can all be fixed tomorrow.”

If you don’t find a use for that dog, it can disappear as quickly as it showed up. Just don’t be too hasty. I’ve had pets, sisters, plot developments of all kinds arrive, apparently from nowhere, but really from something my subconscious has been mulling over. I leave the reference in until I find, perhaps many chapters later, that it’s exactly what the story needs.

The dog may rescue hero or heroine, or alert them to some bad thing about to happen. The surprise sibling may be a character’s saving grace, downfall, keeper of vital family information…unknown to me until they’re needed.

In my Beacons sci-fi series , I wrote two novellas linking the three books of the series together. The first novella, Beacon Starfound, concerned a character called Guy, the genetic twin of Adam, one of my alien beacons. When I conceived Guy I had no idea of his role. Gradually he became more mysterious and interesting, until by book three, Beacon Homeworld, he proved essential to resolving many story threads.

Having Guy develop as he did was pure serendipity. Or was he?

I think these “happy and unexpected discoveries” are far less accidental than they seem. When a story stalls and I can’t get past the block, it’s almost always because I’ve taken a wrong turn. Once I would have been tearing my hair out. These days I let my subconscious figure things out.

If I try to force the story to go my way, the result invariably lacks a spark. So I wait. Frustrated, anxious, but telling myself I’ve been in this place before and always found my way out.

If I don’t have time to wait, I fall back on my trusty “twenty options” process from The Art of Romance Writing. I’ve blogged about this here and at workshops because it’s such a reliable tool. It’s best done with pen and paper. You can on screen but paper feels more freeing, somehow. Up to you.

Down the left hand side of the paper write the numbers one to twenty, leaving a line of space between each number. Then you pose the story problem to yourself – for example, why does the heroine go to meet the bad guy without seeming too stupid to live.

Then without stopping, you write twenty ways you could solve this problem. For example, he could be the identical twin of someone the heroine trusts. He could blackmail her in some way, holding her dog hostage, perhaps. Or he could fake a message to her from the hero.

When you’re done, read over the list. Is there a germ of something workable in one idea? Could some be combined? If your list gives you nothing useful leave it for a while and try again next day. Persistence pays with this one.

In my current manuscript, serendipity has already struck. My hero owns a valley I plan to use in several books. As I was writing, the hero’s brother-in-law mentioned some additional land for sale adjoining the valley. Hero can’t afford the land because…reasons. BIL suggested a partnership. So far I don’t know why this extra land exists but I’ll go along until my brain works it out and lets me know.

The only thing I know for sure is that the land will have a purpose in relation to the story. In writing, that’s how serendipity works.

Have you ever had a random element jump into a story, only to prove essential later? Share your thoughts in the comments below. The blog is moderated to avoid spam but your post appears right away if you click on “sign me up” at right. I don’t share your details with anyone.

Happy writing and may serendipity bless you work,

Anthology – out in ebook and print now

Google Play (All devices except Kindle)

Hi and welcome to First Monday Mentoring when we discuss aspects of writing not normally talked about.

For instance, the art of watching paint dry. I’m doing it a lot lately, not literally, but in the sense of not wanting to sit down at my desk and write actual words. After being published for four decades, and ninety books, this is a strange experience.

I’ve found all manner of things to fill the time, from reading to giving my home a spring makeover. Watching too many real estate and renovating programs may make one thing springboard off another. I also wonder, is this how people fill their time when they don’t have stories and characters chattering away in their heads?

After a while you start to wonder if the muse has deserted you for good. Not that I’m a big fan of the muse, believing that professional writers write, inspired or not. Over many years, when I’ve been unable to conjure up the exact words I want, I’ve given myself permission to write any old how, telling myself it will be edited later.

This process has never failed me – until now. But as with everything to do with writing, there are no absolutes. The process of writing is what spy thriller writer, Len Deighton, called “a muddled system of trial and error.” He said the hardest lesson to learn is that thousands of words must be written and then discarded or rewritten before the “keepers” emerge. 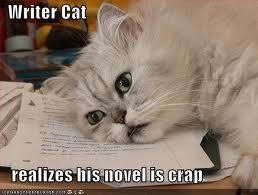 Deighton said he softened the blow by keeping his early drafts for months before throwing them away. If nothing else, this gave him the objectivity which is mostly lacking when confronting our freshly written drafts.

Writers trip ourselves up in dozens of ways. The most common, fear of failure, can lead to making sure we have no time to write that best seller. Spring makeover, anyone? Social media, while being a useful promotional tool, can feel as if we’re writing, without contributing a single word to a manuscript.

So here are five ways to stop yourself watching paint drying – or real estate programs.

The time needn’t be from nine to five, unless it suits you. If you are most productive in the early hours or late into the night, keep these times free from distraction and interruption.

Even if it’s only a corner of a room, or in your car, having that space and associating it with writing can be a powerful tool.

Victor Pineiro, blogged here http://tinyurl.com/zym8cq4 about writing his first novel by working on a laptop during his hour-long train trip to work. He says, “The key was not getting angry at myself for writing pure garbage some days. This was just an experiment — nothing to lose. As you’ve read dozens of times, once you do something for thirty days it becomes habit .” Once his laptop was open, he says, he felt obligated to write and it slowly became a habit.

Like Pineiro, you can write while commuting; dictate story notes on your hands-free phone as you drive; plot the next step in your book while awaiting an appointment; or read reference material online while the kids play sport. This frees up your writing time to generate actual words.

I’ve blogged here about the critic over your shoulder, the inner voice insisting you can’t write so why bother? Somehow we have to overcome the critic and write anyway. Writing for yourself alone, and not letting anyone see your work until you’re ready, often helps. You can also do what Kate Grenville told me she does – put a sign over your desk, reminding yourself, “It can all be fixed tomorrow.”

Now all I have to do is take my own advice. Right after I check out this Tiny House makeover.

Three things writers tell ourselves. Only one is true.

We writers are very good at spinning yarns – that’s why we’re writers. But we are also very good at telling ourselves stories. Lies if you like. The trouble is when we start believing them. Here are three I’ve heard, and told myself, countless times. Can you spot the one truth?

1. I don’t need to write my idea down. I’ll remember it in the morning.

This is a big one, and no, you won’t remember in the morning. All you will remember is that you had a brilliant idea. If you’re lucky, you may remember enough fragments to sort of recapture the idea. But you will always know there was more. If only you’d made the effort to scribble down a few notes, dictated your thoughts into a recording device, or left yourself a voice message as a reminder, you’d be on your way. The moments directly before and after sleep are known to produce brainwaves associated with creativity. Unfortunately, they are also least connected to short-term memory, which is why this problem occurs. Capture the lightning. Make notes. Your brain isn’t hard-wired to remember your brilliant ideas in these brief but fertile moments.

2. I won’t write today. I can catch up tomorrow.

You know this for a lie the moment you read it. We all do. Whether your target daily word count is five hundred words or five thousand (yes, these freaks of nature do exist), you’re wise to try to write them, even if you think they suck pondwater.  Kate Grenville told me she has a sign over her desk saying, “It can all be fixed tomorrow.” Another amazing writer, Nora Roberts,  said at an Australian writing conference, “You can fix a bad page, you can’t fix a blank page.” Skipping a day because of an emergency is one thing. Skipping because you don’t feel like writing is dangerous. One day can easily become many, until you have to question how much you really want to write.

Strangely, this isn’t a lie. Sometimes the only way to solve a writing challenge is to write your way through it. When writing my screenplay recently, I knew what I wanted to have happen at the climactic scene. What I didn’t know was how the scene would go. I wrote a treatment (synopsis) for the producer and told him that the scene would change. When I got there, it took me several long nights of brainstorming on paper to resolve the problem. What if? Why would she…? Could she do that? What if he…? until I had the breakthrough I needed. The result was a nifty twist I couldn’t have foreseen at the start, because I hadn’t lived in my characters’ world for long enough.

“If you build it, they will come” is often true of writing. Capture your ideas. Commit to showing up most days and meeting your chosen word count. Your reward will be a world that comes to life for you and your readers.